Jersey cattle have existed in the UK and Ireland since the 1700s. While Jerseys are one of the oldest dairy breeds, how cattle were first brought to the island of Jersey is unclear.

Jersey cows for sale across the globe

From the mid 1800s to the start of World War I, Jersey cattle were exported in their thousands to America. During the late 1800s the breed was also imported by numerous other countries. These countries included Brazil, Canada, Costa Rica, New Zealand and South Africa.

Today, Jersey cattle remain incredibly popular. They are one of the largest breeds of dairy cattle in the world. Interestingly, there are only a few thousand on Jersey itself, but then the island is relatively small. Other breeds of cattle are not permitted on Jersey.

The other popular breed of cattle from the Channel Islands is the Guernsey. Find out more about Guernsey cows.

Jersey cattle are usually light brown in colour. They can range from grey to a muted black. Some have white patches, but a true Jersey will have a black nose bordered by a white muzzle.

The Jersey has always been renowned for its milk production. Their milk has more butterfat and protein than milk from the Holstein. Milk from a Jersey cow is ideal for making cheese.

Jerseys are the smallest dairy breed and one of the most efficient at converting feed to milk. They are able to adapt to a wide range of conditions. Herds of Jersey cattle can now be found all across Europe, South America, Australia, Zimbabwe and Japan.

Jersey cows typically weigh around 400 – 450 kilos. Jerseys perform well under a range of systems. They are known for their high feed conversion efficiency. Jersey cows often produce in excess of 13 times their bodyweight in milk in each lactation.

The Jersey cow is docile and easy to manage. They calve easily have great fertility and a short calving interval.  They are renowned for the quality of their milk which contains more protein, calcium and butterfat than ‘average’ milk.

Jersey bulls have a very different temperament. While small compared to other dairy breeds, the Jersey bull is extremely muscular and far from docile. It also has a very poor beefing ability. 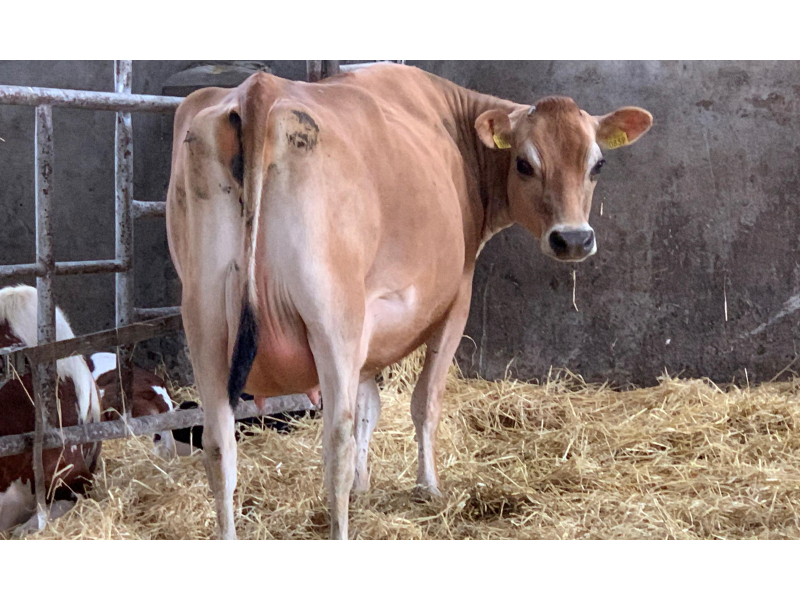