Piedmontese cattle (sometimes referred to as ‘Piemontese’) originate from Piedmont in the north west of Italy. Originally a triple-purpose animal – used for draught work and in milk and meat production – the breed is now used predominately for beef. That being said, in the Italian region of Piedmont the milk of the Piedmontese cow is used in a number of its cheeses.

Piedmont is surrounded by the Alps, so these cattle can adapt well to most climates. They thrive in lowland or highland pastures. The climate in Ireland and the UK poses no problem to the Piedmontese.

The presence of the myostatin gene in Piedmontese cattle allows muscle to grow without the normal restrictions. Indeed, the Piedmontese has around 14% more muscle growth than other cattle. (This double-muscling can also been seen in the Belgian Blue.) The myostatin gene also helps the beef to be consistently tender.

Back in the late 1800s, this muscle growth caught the attention of breeders who designed breeding programs to improve the herd. The first Italian Herdbook opened in 1887. Since arriving in the UK in the late 1980s, Piedmontese cattle have become increasingly popular with beef and dairy farmers.

Piedmontese cattle are usually grey-white in colour with black around the muzzle, eyes, ears and on the tip of the tail. Their horns are also black. Calves however, are fawn coloured and change colour as they mature.

This is a medium size breed. Cows weigh around 550 kilos, bulls about 850 kilos. Double-muscling normally occurs several weeks after birth, so calving is easy. Calves weigh 40 to 45 kilos. Piedmontese mature early and their weight gain can be 2kg per day. They are known for their high feed conversion and efficiency.

Piedmontese cattle provide a high output carcass. The breed has the ability to kill out at 70% and bone out at over 80%. The meat is lean and full of flavour. Tests have shown there to be less cholesterol present in 100g of Piedmontese beef than in the same amount of pork or roast chicken.  Tests have also concluded that on average, the steak from the Piedmontese is around 70 grams heavier than that from Angus / Hereford crosses.

The meat potential and low fat rates help to rank the Piedmontese in the highest categories of EUROP classification. 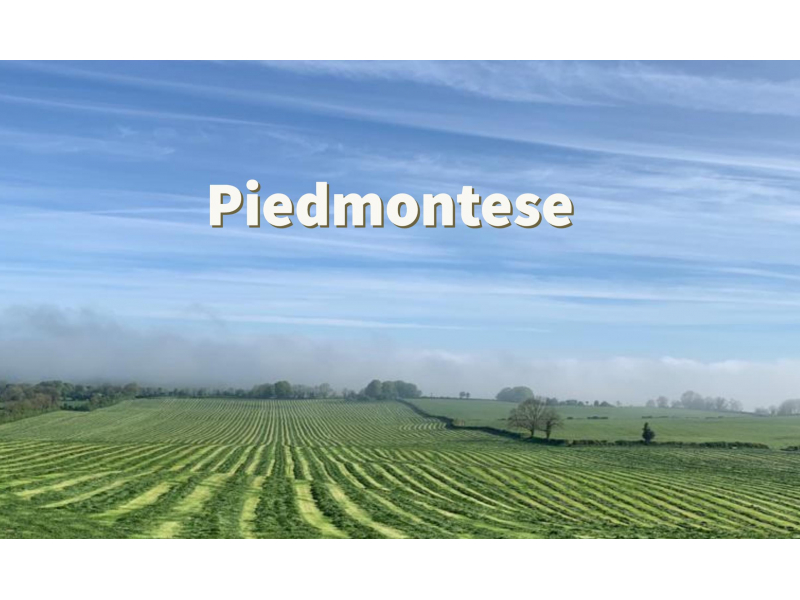